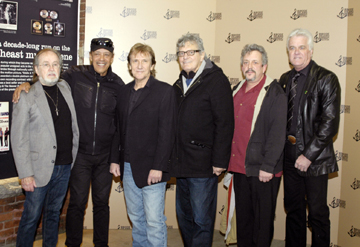 PHOTO BY LAURA COLANTONIO At a Rhode Island Music Hall of Fame press conference held Friday, Jan. 18, at Pawtucket’s Hope Artiste Village, nine 2013 Inductees were announced as well as April 28 as the date for this year’s induction ceremony and concert. From left, 2012 inductees Gerry Granahan, Michael Antunes and John Cafferty of the Beaver Brown Band, Peter Andreoli of Anders & Poncia, and Chris Vachon of Roomful of Blues, were on hand to congratulate Steve Smith, right, a 2013 Inductee as leader of Steve Smith & the Nakeds.

Steve Smith reacted to the upcoming induction of his group The Nakeds, celebrating their 40th anniversary this year, by saying, “We’d like to thank the Music Hall of Fame for this unbelievable honor you have bestowed upon us. We’d also like to thank our fans, family and friends – especially our wives and our loved ones – for the sacrifices they have made through the years allowing us to follow our dream.” Fellow inductee Paul Geremia added, “I am very proud to be inducted into the Rhode Island Music Hall of Fame. I only wish my parents were here to see it. I am especially honored to be inducted at the same time as one of my original musical inspirations, Tony Poccia, the steel guitarist for Eddie Zack & The Hayloft Jamboree.”

The Rhode Island Music Hall of Fame, formed in 2011, is a nonprofit organization dedicated to celebrating, honoring, and preserving the legacy of Rhode Island musicians, educators and industry professionals who have made significant contributions to both the national and Rhode Island music scene. The Hall of Fame’s inaugural inductees in 2012 were John Cafferty & the Beaver Brown Band, Roomful of Blues, Dave McKenna, Eileen Farrell, Oliver Shaw, Ken Lyon, Anders & Poncia, and Gerry Granahan.

At last year’s induction ceremony, the public got to view displays honoring the first eight inductees in the Hall of Fame museum space, located in the hallways of Hope Artiste Village. This year’s event will see nine more displays unveiled celebrating the 2013 inductees. Eventually, the museum space will hold more than 100 displays as well as assorted Rhode Island music history memorabilia and interactive components for visitors to enjoy.

In addition to the annual induction ceremony and the creation of museum displays, the group’s third major initiative is an online music archive featuring information and audio/video recordings by those involved in Rhode Island’s past and present music scene. The online archive will include not only the work of the inductees, but will be an ongoing project documenting and preserving the entire Rhode Island music scene with contributions from all genres and eras.

“As the organization grows,” Dr. Robert D. Billington, chair of the RIMHOF board says, “the Hall of Fame will be committed to developing programs aimed at promoting and strengthening Rhode Island’s current and future music scene. For the first time in our state’s history, we will have a designated location where people can learn about local figures that contributed to every aspect of music industry, representing every musical genre, and ranging from performing artists and songwriters to producers and industry professionals.”

One of the new initiatives of the Music Hall of Fame is the ongoing development of a wellness program for musicians called Tune In & Tune Up which was introduced to the public last month. There will be an informational table at the evening event regarding this new health program aimed at musicians and industry professionals in the Ocean State.

All proceeds from the annual ceremony event go toward creating museum displays, acquiring recordings and memorabilia, and digitizing the collection for permanent online access for future generations. All organizational work is donated by members of the Board Of Directors and a staff of volunteers.

This ongoing initiative,” says Rick Bellaire, vice chair of RIMHOF, “provides a great opportunity to not only acknowledge Rhode Island’s musical greats and celebrate their achievements, but to finally have an organization whose primary goal is to promote and preserve Rhode Island’s rich musical heritage in all its forms. With actual exhibit space, coupled with our online archive, we have in place the tools to showcase the best of Rhode Island’s musical artistry.”

For more information and a full schedule of the day’s events, visit www.rhodeislandmusichalloffame.com

Steve Smith & The Nakeds BIO: Since 1973, Steve Smith, of Smithfield, has spent four decades barnstorming the country with his 10-piece horn band, The Nakeds, playing his personal brand of Rock ‘n’ Roll and Rhythm & Blues and attracting a huge following in the process. Originally known as Naked Truth, the group faced down all economic pressures to downsize and consistently produced and released original music in the hope of securing a major label record deal. Steve’s determination paid off in a big way. The majors came knocking on his door in 2008 when the band’s 1984 indie hit “I’m Huge (And The Babes Go Wild)” was featured by the animated hit TV series “The Family Guy.” The YouTube video for the song has seen almost 400,000 views and the interest in the group prompted Sony Records to offer a distribution deal. The first release, a “greatest hits” package containing the best of their independent recordings, was a best seller; a follow-up, “Under The Covers,” was released in 2012.