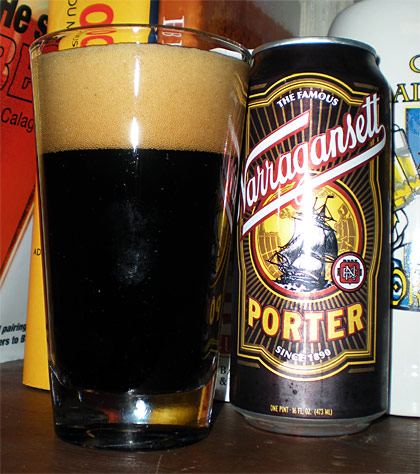 From the Malted Musings blog, Beers from Narragansett that AREN’T Lager.

First off: sorry for the canned (haha) images of beer for the next few Tasting Notes features. My phone is on its last legs, and I’m not really about lugging a camera to Eli Cannon’s Tap Room to specifically take pictures of my beer, so until I get my phone upgraded we are riding on people who have taken REALLY good pictures of their beer!

These notes are from the on-tap Narragansett night at Eli Cannon’s a few weeks back. I started off with the Narragansett Porter.

This beer pours out a dark, dark chestnut, almost black. It smells lightly of sweet malts. At first taste this beer starts off light and sweetly malty, but quickly moves to a strong, bittersweet note that then transitions nicely to a smoky bitterness that lingers and slowly fades to a dry, clingy bitter hopping. This beer is medium bodied and surprisingly bitter, but terminates with a lingering sweetness that mingles well with smoky overtones. This beer is much heavier than their flagship lager and also has some interesting bittersweet notes that bring some interest and build body. All in all a nice, easy drinking anytime beer that fits well for the winter months.

Next up was the Narragansett IPA. This is a limited release from ‘Gansett, but I hope to see more of it in the future. 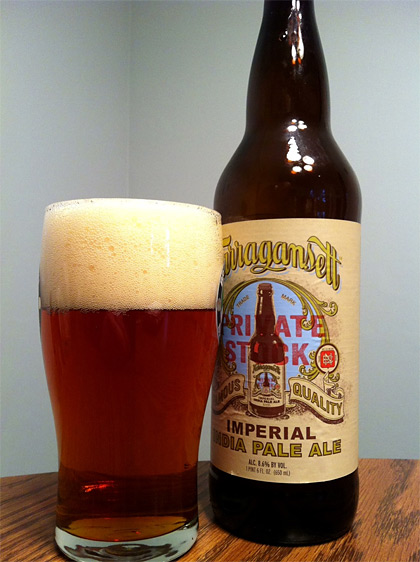 This beer pours out a deep amber gold, barely translucent. It smells very slightly of sweet bittering notes. This beer starts mild, but builds to a pointed bitter note. This bitter note very quickly moves to a floral/grapefruit bitter note that lingers with a citrusy overtone. This tone sits very heavily on the palate in the traditional way of the IPA. Overall this is a medium bodied beer due to the bitters. It has a potent bitterness to it, but it is balanced with a citric sweet note that mingles with the heavy hopping and creates a long-burning IPA that simmers with a pleasant bite on the palate for a long time. This is an interesting departure from traditional ‘Gansett beer, but one that is very well balanced, interesting, and biting enough to bring some heat into the winter.

The last beer I had was was the Narragansett Cream Ale. 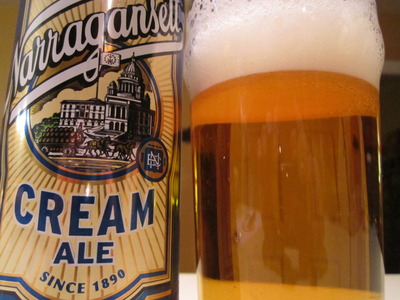 This beer pours out a murky golden color that is barely translucent. It smells light and barely malty. At first sip this beer has lighter maltings that move gently to a slightly sour floral sweetness. This lingers sweetly until ending richly sweet with a very slight sour tone on the back end. This is a light to medium beer that is sweet and very refreshing. The malts build up a slight body that keeps the brew interesting. Overall this is a very accessible cream ale. Easy to drink a few of these and definitely one you’ll want to snap up for summer. Not really the best winter beer, but a solid offering that will be a hit once the weather warms up.