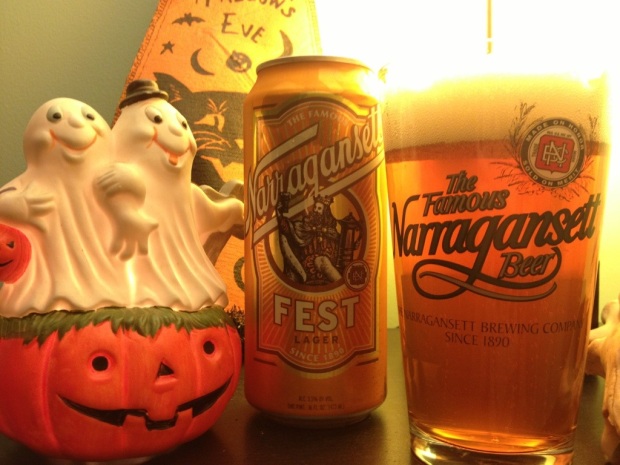 By Ashleigh Bennett from Two Girls One Beer.

It’s October and that means fest style beers are well underway. Oktoberfest is a fest held in the Bavaria region of Germany, which aside from great food (sauerkraut, pickles, cheeses, speck…) is notorious for its beer. It’s probably one of my favorite regions of Europe, if not for the appreciation of hearty food and ale, then certainly for the untamed alpine landscape. I had the pleasure of going to Oktoberfest in 2010 for a couple of days, and while it’s become less of a traditional end of harvest, ale drinking precursor to winter and more-so of a party, it was a good time. I mean look at these fun facts from Wikipedia:

Narragansett has a fall fest Märzen style beer that was released around mid-September and is a limited release, staying on shelves until about November/early December. The orange can has a depiction of Saint Gambrinus on it, the unofficial patron saint of beer, and probably my favorite saint behind the patron saints of lost causes and Animals. Don’t even get me started on the sociological implications of this saint: Martin de Porres – black people, hairdressers, hair stylists, lottery, lottery winners, mixed-race people, public education, public schools, state schools, sweepstakes, sweepstakes winners, televisions…

This beer rings in at 5.5% ABV, and is tawny in color with a thick, creamy head that surprisingly doesn’t leave any lacing, and medium carbonation. The aroma has a wheat scent to it. Definitely hints of bread, some esters, and then sweeter “harvest” notes like honey and sugar. This beer, as it’s heavy on the Munich-style malts, has the smell and taste of toasted grains and brown sugars, what I’ve heard some people describe as hints of “toffee”, but the end of the sip has a distinct hop profile that seemingly comes out of nowhere. Not super carbonated.

It’s a good Oktoberfest, and the Narragansett craft cans are so affordable that they are a good introduction to craft beer for anyone. So there’s really no reason not to try this seasonal.