Gansett is sponsoring the 35th Anniversary Party of the Late Riser’s Club radio show on WMBR/MIT . Congrats on 35 years of some epic punk rock. Enjoy some of Joanie’s favorite punk acts and more tonight at Radio in Union Square, Somerville. Show starts at 9 and is only $5. Yeah, the same price that most punk shows have been since 1977.

The Amesbury Sports Park will be hosting the 6th Annual Brew Fest on Saturday, September 22, from 2:00 to 8:00 p.m. at its facility at 12 South Hunt Road. The Brew Fest, sponsored by Dos Equis, will feature well over 100 microbrews, barbecue, ZORB rides, Sumo Wrestling and Beer Olympics as well as live music on an outdoor stage. Visit www.amesburysportspark.net and enter promo code “BeerMe” to get 50% off your admission! 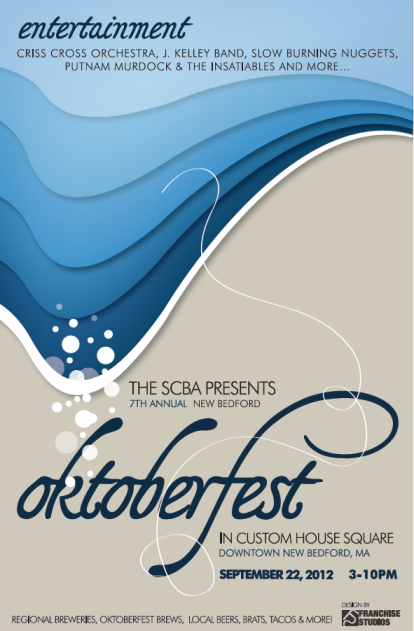 Here’s the great write-up about this year’s New Bedford Oktoberfest by Shonna McGrail Ryan in the New Bedford Guide online:

We’re starting to feel the crisp approach of fall in the air, and soon the leaves will be turning magnificent colors and autumn will be upon us.  Of course, for beer lovers worldwide, fall time means more than apple picking, pumpkin carving and scenic drives; fall time means Oktoberfest is here again!

The New Bedford Oktoberfest will be kicking off its 7th year of drinking brews and dancing to tunes on Saturday, September 22nd.  The fest takes place at Custom House Square in historic Downtown New Bedford and goes from 3-10 p.m.  Oktoberfest is not only a great time to try out some unique beers with your friends, it is also a major fundraiser for a great cause.  This year, proceeds will go to benefiting Star Kids and The Childrens Advocacy Center of Bristol County.  A fundraiser that involves drinking beer and listening to great music can’t be a bad time!

Besides the fact that Oktoberfest is for a great cause, it is also an event that should not be missed due to its selection of seasonal brews.  Everyone who can consider themselves a beer connoisseur knows that this is the best time of year when it comes to pumpkin ales, hard ciders and fall time favorites.  This year, the New Bedford Oktoberfest will be featuring Berkley Beer Company, Cisco Brewers Nantucket, Just Beer, Woodstock Inn Brewery, Sam Adams, Smuttynose and the Mayflower Brewing Company.

In addition to the brews is the food which will be sold by Pizans, Rose Alley and No Problemo.  There will also be a winegarten.  And of course, there will be the music.  The Slow Burning Nuggets will take the stage from 3:45 to 4:30 p.m. with their eclectic mix of what their Facebook describes as “Space/Electronic/Rock/Pop”.

Afterwards, The Tree will take the stage.  They are a high-energy band that started from UMass Dartmouth/New Bedford that plays a fusion of hip-hop, rap, funk, reggae, rock and everything in between.  I have heard a lot about The Tree but have never seen them play, so this seems like a great addition to this year’s music line up.  The Boomcats will follow up that performance with some “good old blues fused rock and roll”.

At 6:45 p.m. the local favorite J. Kelley Band will perform and be followed up by Putnam Murdock and the Insatiables.  Putnam Murdock has an illustrious history a musician and a songwriter, so this performance promises to be an interesting one as well!

Crisscross Orchestra will perform as the final act of the night, closing out Oktoberfest at 10 p.m.  This 11 member ensemble features an interesting variety of instruments such as steel pans, the Irish pennywhistle, trumpet, electric guitar, flute and the accordion.  The result is African roots influenced music led by award winning West African Ghanian musician and composer Obuamah Laud Addy.

Needless to say, all in attendance at the NB Oktoberfest can expect a night of good food, great drinks and entertaining music.  Tickets can be purchased for $20 in advance by going to Rose Alley Ale House or Pizan’s Pizzeria.  Tickets are $25 dollars at the door.